The Power of Small ‘Nudges’ – Applied Psychology in Action

The field of psychology has advanced a great deal since it gained a rigorous footing after WWII, and is starting to yield practical dividends in our society and in everyday life (See my prior blog post on cognitive psychology).  One very fruitful intersection has been psychology and economics, with the founding of behavioral economics, a hot new field.  The interesting thing is that while many of the findings of behavioral economics may surprise us, once we have seen them demonstrated we are able to comprehend them fairly easily because they conform to our intuitive understanding of how our minds sometimes operate.  In other words, we recognize that we can act irrationally (and we often know why), but the research shows us just how pronounced and ubiquitous these irrationalities can be.

Behavioral economics confirms many of the findings of cognitive psychology, but then extends their application to new areas of human choice behavior and the realm of policy decisions.  Richard Thaler, an economist at the University of Chicago, is the acknowledged founder of behavioral economics (though there were strands of similar thinking by predecessors).  He, along with co-author Cass Sunstein, published their ideas in a bestselling book:

Nudge, Improving Decisions on Health, Wealth, and Happiness (2009) (link to the book on Amazon.com)

This book is terrific, and has the spirit of a social manifesto about it.  Thaler and Sunstein describe how small “nudges” of human behavior can have significant and beneficial impact, both at the individual and societal level.  The quintessential example is when a Dutch economist had etchings of flies placed in public urinals in mens rooms at an airport to help focus, their, ahem–aim: 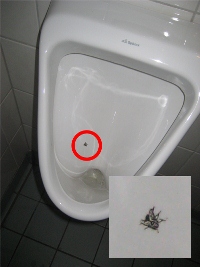 They estimate that this has reduced spillage by 80% (in addition to saving labor, it reduces the use of chemical cleaning agents, water, etc.).  Many men will have noticed similar fly decals in other public urinals.  The best part is that no instructions are required, people just do what came naturally.  This is why the term “nudge” is fitting, because the idea is to gently steer people towards the best options, but still leave freedom of choice.  It will undoubtedly be a relief to some to see that many of these types of applications of psychology and economics are so simple and straightforward (rather than nefariously labyrinthine), but in a way this makes sense:  a major insight from psychology is that when we are not acting rationally our brains operate in a very simple, naïve way, and since we are trying to influence this simpler part of ourselves, the nudges themselves are very simple (think of how obvious beer commercials are).   Thus, nudges are ways to leverage human nature in achieving desired goals, rather than fighting human nature.  It is a sort of cognitive judo, using our own powerful natural inclinations for our benefit.

The concepts drawn upon in Nudge are also consistent with other recent books about change that rely on insights from cognitive and social science.  In fact, there is a synergistic effect when you read these because they paint a coherent picture of human nature that we are learning more and more about.  Dozens of the books are good, and here are three I would recommend highly; there are concepts in each that have stood out and stuck in my mind to this day:

Switch: How to Change Things When Things Are Hard (2010) by Chip Heath and Dan Heath (here on Amazon.com)

Influence: The Psychology of Persuasion (2006) by Robert B. Cialdini (here on Amazon.com)

The Power of Habit: Why We Do What We Do in Life and Business (2012)  by Charles Duhigg (here on Amazon.com)

In this post I want to describe some of the most interesting nudges identified in Thaler and Sunstein’s book, and talk about some of the general principles behind them.  I would guess many people who read the book will latch on pretty quickly to the concepts and will start thinking of potential behavioral nudges all around them.  In future posts I want to describe a few ideas for nudges that I’ve had that have been inspired by the book.

Thaler and Sunstein define a nudge as follows:

A nudge, as we will use the term, is any aspect of the choice architecture that alters people’s behavior in a predictable way without forbidding any options or significantly changing their economic incentives.  To count as a mere nudge, the intervention must be easy and cheap to avoid. (p.6)

They also introduce another term, which is very interesting:  a choice architect.  This is anyone who has responsibility for creating, presenting, or facilitating the choices of others.  This could be a cafeteria manager deciding where to place the fruit, an HR professional who is deciding on savings plan options and enrollment forms, or a physician who is explaining different treatment options.  This role may sound like it is meant to be manipulative, but the authors point out that a) choices are always going to be developed and presented in some way, b) each way they are presented will have an effect on what is chosen, as we see in research, c) so why not present them in a way that aligns with the best interests of the chooser?*  *(The cynic will ask what happens if the choice architect aligns against the best interests of the chooser–well, we’ve had that for 50 years now, it is called advertising & marketing, and the good news is that we are developing a sharper radar for that.)

Below I’d like to describe various nudges described in the book; I’ve categorized them based on the human tendencies I think they leverage.  I’ll explain why I’ve separated these categories into A/B later in this post:

We tend to stick to defaults:

We tend to respond to what is in front of us:

It takes effort to remembering things:

We have difficulty exercising willpower in the moment: 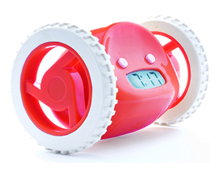 Clocky rolls around the room randomly and “hides” when you hit snooze, so it will require some effort to find it again to stop the alarm.  Just think about that:  we have created a pseudo-sentient robot as a pawn in the tug-of-war between our planning/rational selves, and our in-the-moment future selves.  There is another clock invention which is also interesting, designed for procrastinators.  It is set some minutes ahead of the actual time (an old trick many chronic procrastinators use), but it has the twist that the amount of time it is ahead is random within some range.  Thus, you can’t automatically adjust for the amount it is ahead, and have to play it safe.

We relate to stories:

We are motivated by social comparisons:

These were some of the nudges in the book that seemed most impressive to me, and I hope they inspired you as well.  If you have already heard of many of them, or if they seemed obvious, then that is a good sign—it means that cognitive science-based decision theory (already intuitively grasped by advertisers and politicians) is starting to become more widely known and incorporated into the way we think about our lives and society.  Now why did I group the nudges into the two lists A and B above?  Because the way that I have been looking nudge-thinking, I see it as reducing the perceived effort of doing something that is beneficial to us.  There are two broad ways of doing this:

The types of nudges in list A above all aim to simplify things to make things cognitively easier for us.  The holy grail is something that requires no conscious effort, only subconscious effort.  Does this seem unachievable?  Not at all.  An example is when status report updates utilize a red/yellow/green metaphor to summarize the overall progress.  We don’t need to process this very much because we already have strong associations from traffic lights.  Perhaps the most obvious A-type nudges are when one forms good habits.  If you develop a good habit and it becomes second-nature, you reap the annuity-like benefits thereafter for “free” in some sense, as you no longer think of them as choices requiring mental energy.  Think of the person who chooses to always take the stairs at work or who makes their bed the minute they wake up.  Or this concrete example:  let’s say you add an ounce of half-and-half with each of your two cups of coffee every day.  Each ounce of half-and-half has about 40 calories and 3g of fat, pretty moderate.  Now let’s say you’ve taken the effort to wean yourself off of cream and now comfortably drink your coffee black.  The result is that every month you are saving 2,400 calories and 180g of fat; the calories equivalent to one day of meals and fat equivalent to 5 Big Macs!  As a personal nudge, I’m convinced that if I rearrange my morning routine so that I take a shower as soon as I get up before drinking coffee (versus the other way around) I can save 10 minutes—not much, but if it becomes a habit which I don’t mind, that is an extra 10 minutes every weekday for the rest of my working life!  Thus, you can see the power of these types of nudges.

The nudges in list B above add an element of motivation that is strong enough that we don’t mind the effort, or it lowers the perceived effort.  This is nothing new of course, and covers everything from fixing a snack for a hungry child when you’re tired to running after a ball during a soccer game.  A more intentional expansion of these B-type nudges is the concept of gamification, where game-type elements (levels, badges, etc.) are incorporated into otherwise useful or beneficial activities.  Gamification is a hot trend right now (there is an upcoming free MOOC on gamification next offered by Coursera in August (link here) and its principles are being applied to all manner of personal and corporate areas, such as social websites to track exercise commitments, Yelp check-ins, company intranet posts, and, as above, energy conservation.  To illustrate the power of this nudge with a simple illustration, imagine two pairs of retired friends who meet in the park every day to play a game of chess.  The first pair play semi-seriously and don’t really mind who wins or loses, and the second pair are fairly competitive and work hard to try to beat each other.  Now after 10 years of playing in the park, think about how much more mental exercise and challenge has the second pair faced than the first pair, both spending the same amount of time (let’s assume that the impact on the friendships is the same).  You can count all of that as a free ‘surplus’ that accrued due to the extra motivation that was present.  I am emphasizing this somewhat obvious phenomenon because it is remarkable:  in some sense what we get from habit, gamification, and things like this are creation ex nihilo, getting something from nothing. This is something physics begrudges us, but is possible in the realm of human behavior, and we should try to take advantage of these opportunities as much as possible.

Are there opportunities for potential nudges that you can see, which either remove conscious effort or naturally increase motivation so much as to mask it?  As I think of ideas I’ll blog about them, and I hope you’ll share your ideas in some forum as well.