In my last post, I described the power of nudges and categorized them into two types, those that reduce effort and those that increase motivation, in ways that take advantage of how our minds work.  Here is an example of the second type of nudge.

To reduce the use of paper napkins used at fast food restaurants and other food outlets in order to conserve natural resources and reinforce a conservation-mindset.

Place stickers on napkin dispensers at food outlets that challenge (but do not force) people to try to get by on one napkin.  The sticker clearly indicates an independent conservation effort, not just a corporate cost-savings measure, and they can visit a website to see statistics on the trees, water, and fossil fuel savings associated with napkin conservation.  Grassroots volunteers (no pun intended) could solicit the food vendors they frequent to ask them to place the stickers on their napkin dispensers, and many food vendors would presumably be motivated by the cost savings and a boost to their eco-friendliness.  A quick mock-up of what the sticker might look like is: 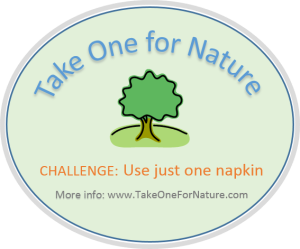 This idea addresses a dynamic we all see:  since paper napkins are free, we tend to mindlessly take more than we need, and then because we have more, we tend to use them inefficiently.  But we have all been in other situations where perhaps we only have one napkin for ourselves (or for two people), and then we use the napkin much more judiciously:  tearing it in half, separating the plys, dabbing ourselves with each corner and edge of the napkin, etc.  The difference in those two situations is what we have available at the moment, and in either case (a handful of napkins or just one), we usually make do.  Thus, the idea is to try to get people to force themselves into that situation of minor scarcity.  In this way the challenge is a sort of game: how resourceful can you be with your napkin?  I think people will surprise themselves with how little napkinage they really need.  This is the nudge aspect of the idea:  to generate motivation to meet a minor challenge that overshadows the effort required to economize on napkins.

If this idea were realized, it may not have a truly large eco-impact in the overall scheme of things, and some might even object that people and businesses would use this as a token effort in place of (or to relieve themselves of the guilt over) much bigger eco-unfriendly behaviors.  This may be true enough, but there is another psychological principle at work here as well.  When you’ve got people making small, even token sacrifices for the “sake” of the environment, this also affects their self-image.  Let’s imagine Joe, who is mildly concerned about the environment, but doesn’t think that he has much impact on it, and so doesn’t generally let it affect his lifestyle.  Joe sees the stickers on napkin holders once in a while and decides to try it, just for kicks.  After a few months he finds himself taking just one napkin nearly all the time, except with really messy foods.  Now a month later, he needs to buy a new toilet and sees a more expensive low-flush model, which before he wouldn’t have considered (Joe likes a vigorous flush).  But…he is the kind of guy who makes sacrifices for the environment in his life…hmm.  Or Joe hears how much water is saved by shortening showers and thinks about his shower routine, etc.  Now I’m not saying Joe is going to go out and drive a Prius just because of his napkin training, and there’s no guarantee that we would become greener citizens.  But it is undeniably true that even small gestures that shape or reinforce our self-identity can have an impact on our future habits and decisions.

Now this is just an idea.  It was brought to my attention that there are one or two things out there that are similar.  Here’s one with the motto “They Come From Trees” which is placed on bathroom paper towel dispensers:  http://thesecomefromtrees.blogspot.com.  There is one difference, however, in that the double-entendre of taking “One” for nature creates a specific game-like challenge to your resourcefulness, captures the imagination better, and may create more motivation than a general reminder that using less is better.