What Vampires in Pop Culture Highlights About Us

In the U.S., there have been many books and movies about vampires over the past few decades, and it seems in popular culture there is a fascination with them, evidence Twilight, Underworld, True Blood, Anne Rice’s Vampire Chronicles, even Buffy the Vampire Slayer.

There is one aspect of the vampire mythology that I find very interesting and I think highlights a cultural difference between Western and Eastern (Asian)  society.  In the world of vampires, older is usually better.  Vampires live indefinitely, or a long time, and the older ones are more powerful, and can often destroy the younger ones.  In several of these stories relatively young vampires run into ancient covens where powerful vampires hold sway.  For example, this is Viktor, a powerful vampire elder from the Underworld movie series: 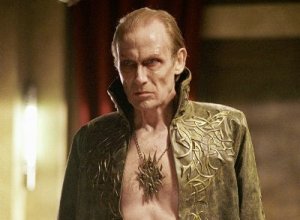 There are even cases in some of these stories where characters come across or search for the ‘original’ or ‘first’ vampire, which of course has tremendous power.  It is akin to a theory of an original endowment of power that is watered down or diluted over time.

I think that this aspect of vampire mythology is much more compatible with Eastern thought (with its roots of Confucianism and Buddhism) than Western thought–and this helps account for the exotic appeal in the West.  As a generalization, I think it’s fair to say that elder generations are more respected in the East than in the West.  For example, it seems much more likely that someone in the East would say about some issue or problem:

I haven’t thought about this nearly as much as my elders have, nor do I have the life experience they do–I should give the most weight to previous solutions and the opinions of those more experienced

It’s quite possible I am thinking about this issue in a new way, in a way that no one before me has thought of it, and I might come up with a novel solution that is better than anyone else’s

These two ways of thinking might contribute to Eastern societies having higher respect for the elderly and Western societies having a better track record on innovation.  In the West, or at least in the U.S., we worship youth and don’t treat the elderly very well–which many of us decry, but I wonder if some of that is the price we pay to have a mindset that is focused on a relentless, exuberant, irreverent drive for innovation?  Well, if you believe that it is better to be somewhere in between, then I guess the West’s fascination with vampire-mythology, and the East’s middle class embrace of consumerism and technology are positive trends that follow in a long train of cross-cultural influences across civilizations over the centuries.